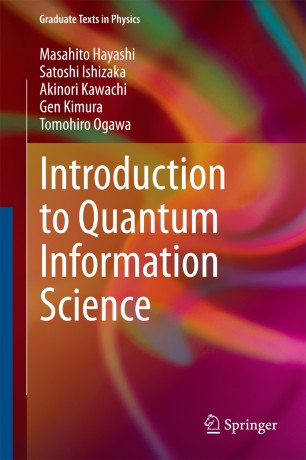 This book presents the basics of quantum information, e.g., foundation of quantum theory, quantum algorithms, quantum entanglement, quantum entropies, quantum coding, quantum error correction and quantum cryptography. The required knowledge is only elementary calculus and linear algebra. This way the book can be understood by undergraduate students. In order to study quantum information, one usually has to study the foundation of quantum theory. This book describes it from more an operational viewpoint which is suitable for quantum information while traditional textbooks of quantum theory lack this viewpoint. The current  book bases on Shor's algorithm, Grover's algorithm, Deutsch-Jozsa's algorithm as basic algorithms. To treat several topics in quantum information, this book covers several kinds of information quantities in quantum systems including von Neumann entropy. The limits of several kinds of quantum information processing are given. As important quantum protocols,this book contains quantum teleportation, quantum dense coding, quantum data compression. In particular conversion theory of entanglement via local operation and classical communication are treated too. This theory provides the quantification of entanglement, which coincides with von Neumann entropy. The next part treats the quantum hypothesis testing. The  decision problem of two candidates of the unknown state are given. The asymptotic performance of this problem is characterized by information quantities. Using this result, the optimal performance of classical information transmission via noisy quantum channel is derived. Quantum information transmission via noisy quantum channel by quantum error correction are discussed too. Based on this topic, the secure quantum communication is explained. In particular, the quantification of quantum security which has not been treated in existing book is explained.  This book treats quantum cryptography from a more practical viewpoint.

Masahito Hayashi has received his Ph.D. at Kyoto University, Department of Mathematics, Graduate School of Science, in 1999. Between 1998 and 2000 he was a Research Fellow of the Japan Society for the Promotion of Science followed by three years of research at the Laboratory for Mathematical Neuroscience (Amari's Laboratory), Brain Science Institute, RIKEN. From 2003 to 2006 he held the position of a Research Manager at ERATO, Quantum Computation and Information Project, Japan Science and Technology Agency (JST). During that period he oversaw the ERATO Quantum Computation and Information Project, which at the time was the largest research group for quantum information and computation in Japan. Afterwards he became a Group Leader, Quantum Information Theory Group, ERATO-SORST Quantum Computation and Information Project. In 2007 he joined Tohoku University as Associate Professor at the Graduate School of Information Sciences, Tohoku University. In 2012 he became a Full Professor of Nagoya University, Graduate School of Mathematics.