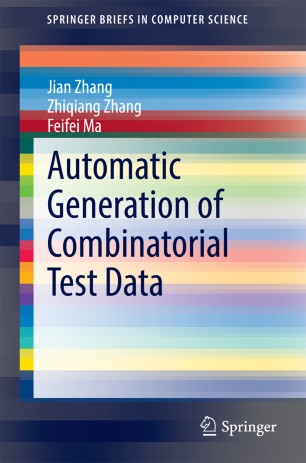 This book reviews the state-of-the-art in combinatorial testing, with particular emphasis on the automatic generation of test data. It describes the most commonly used approaches in this area - including algebraic construction, greedy methods, evolutionary computation, constraint solving and optimization - and explains major algorithms with examples. In addition, the book lists a number of test generation tools, as well as benchmarks and applications. Addressing a multidisciplinary topic, it will be of particular interest to researchers and professionals in the areas of software testing, combinatorics, constraint solving and evolutionary computation.

Jian Zhang is a research professor in the Institute of Software, Chinese Academy of Sciences (ISCAS). He got his BS degree from the University of Science and Technology of China (USTC) in 1988 and his Ph.D. degree from ISCAS in 1994. He has served as a deputy director and the director of the (State) Key Laboratory of Computer Science. His research interests include automated reasoning, constraint solving, static analysis, software testing and formal methods. He has served on the program committee of about 60 international conferences; and also on the editorial boards of several journals (including the Journal of Computer Science and Technology, Frontiers of Computer Science). His research work has been supported by the National Science Fund for Distinguished Young Scholars. He is a senior member of ACM and IEEE.

Zhiqiang Zhang is a Ph.D. candidate in the Institute of Software, Chinese Academy of Sciences (ISCAS). He is interested in software testing and fault localization, especially those related to combinatorial testing. He has been awarded the National Scholarship for Graduate Students.

Feifei Ma is an associate research professor in the Institute of Software, Chinese Academy of Sciences (ISCAS). She got her Ph.D. degree (with honors) from ISCAS in 2010. She has obtained the Chu Yuet Wah Award for Outstanding graduate students. Her research interests include automated reasoning and constraint solving.