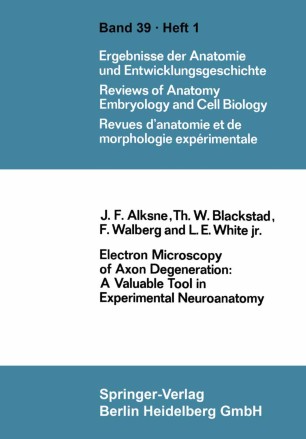 Experimental methods for the mapping of nervous pathways are based partlyon the study of retrograde processes in the perikaryon, partlyon the demonstration of degenerative processes along the peripheral part of a transected axon. For this purpose, the Marchi method by which a selective staining of degenerating myelin is obtained has been extensively used. However, when this method is used the non-myelinated terminals of the transected axons are not stained. The introduction, about two decades ago, of silver impregnation as a means of tracing degenerating axons (especially the Glees and Nauta methods) by which also terminal boutons can be demonstrated, led therefore to revolutionary progress in the investigation of interneuronal connections. Notwithstanding, there are weH known difficulties involved in this kind of research. The capriciousness of the silver methods not seldom results in failure of impregnation with loss of valuable experimental animals. But even when well impregnated sections are used, other fundamental difficulties exist. One of the major problems is to prove beyond doubt that the impregnated structures are degenerating boutons and not merely fragments of non-terminal fibres passing the area under examination. Furthermore, only on occasion will silver impregnation permit one to accurately define the specific part of the receiving neuron on which the impregnated fibres end, i. e. , whether the bouton makes contact with soma, dendrite or spine.