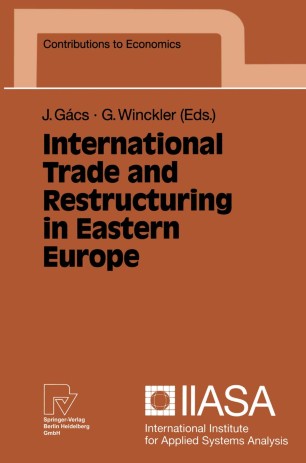 J anos Gaes and Georg Winekler In recognition of the key position of international trade in the transition and the need for concentrated discussions of topical trade issues the International Institute for Applied Systems Analysis (IIASA) organized an international conference on "International Trade and Restructuring in Eastern Europe" which took place in Laxenburg, Austria, on 19 and 21 November 1992. The Austrian National Bank joined IIASA to co-sponsor the event. Participants of the conference were experts of international economics and trade policy from East and West, policy makers, and representatives of international organizations like the IMF, the Commission of the European Communities, the OECD, and the European Bank for Reconstruction and Development (EBRD). The papers prepared for the event and the lively discussions during the conference itself prove that the topics are intellectually challenging and timely for policy makers. It has widely been recognized that international economic relations play a crucial role in the transition of count ries of Central and Eastern Europe. The scope, speed, and success of the efforts to transform the formerly cen­ trally planned economies to market economies have increasingly become de­ pendent on the pattern these count ries have in their relation to the rest of the world. Transition comprises three major processes: macro-stabilization, mar­ ketization, and restructuring. The success of these three hinges to a large extent on the response of these economies to the new conditions set by international trade and exchange regimes.