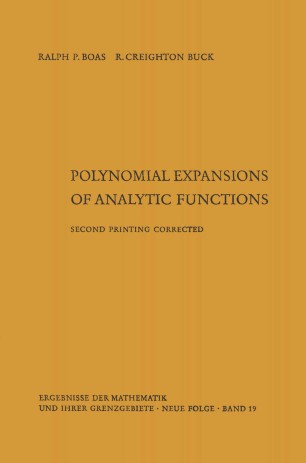 This monograph deals with the expansion properties, in the complex domain, of sets of polynomials which are defined by generating relations. It thus represents a synthesis of two branches of analysis which have been developing almost independently. On the one hand there has grown up a body of results dealing with the more or less formal prop­ erties of sets of polynomials which possess simple generating relations. Much of this material is summarized in the Bateman compendia (ERDELYI [1], voi. III, chap. 19) and in TRUESDELL [1]. On the other hand, a problem of fundamental interest in classical analysis is to study the representability of an analytic function f(z) as a series ,Lc,. p,. (z), where {p,. } is a prescribed sequence of functions, and the connections between the function f and the coefficients c,. . BIEBERBACH's mono­ graph Analytische Fortsetzung (Ergebnisse der Mathematik, new series, no. 3) can be regarded as a study of this problem for the special choice p,. (z) =z", and illustrates the depth and detail which such a specializa­ tion allows. However, the wealth of available information about other sets of polynomials has seldom been put to work in this connection (the application of generating relations to expansion of functions is not even mentioned in the Bateman compendia). At the other extreme, J. M.