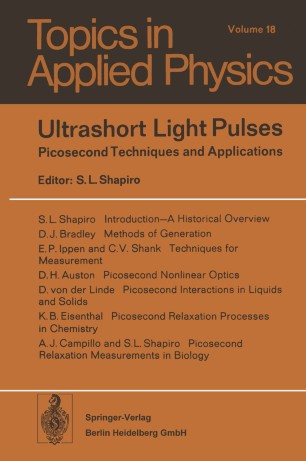 Soon after the invention of the laser, a brand-new area of endeavour emerged after the discovery that powerful ultrashort (picosecond) light pulses could be extracted from some lasers. Chemists, physicists, and engineers quickly recognized that such pulses would allow direct temporal studies of extremely rapid phenomena requiring, however, development of revolutionary ultrafast optical and electronic devices. For basic research the development of picosecond pulses was highly important because experimentalists were now able to measure directly the motions of atoms and molecules in liquids and solids: by disrupting a material from equilibrium with an intense picosecond pulse and then recording the time of return to the equilibrium state by picosecond techniques. Studies of picosecond laser pulses-their generation and diagnostic tech­ niques-are still undergoing a fairly rapid expansion, but a critical review of the state of the art by experienced workers in the field may be a timely help to new experimentalists. We shall review the sophisticated tools developed in the last ten years, including the modelocked picosecond-pulse-emitting lasers, the picosecond detection techniques, and picosecond devices. Moreover, we shall outline the basic foundations for the study of rapid events in chemistry and physics, which have emerged after many interesting experiments and which are now being applied in biology. An in-depth coverage of various aspects of the picosecond field should be helpful to scientists and engineers alike.