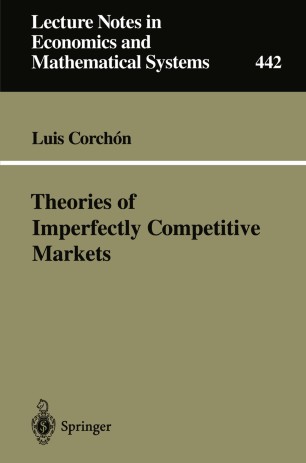 One of the most fascinating debates of our times is the discussion over the merits and capabilities of market economies. Very often, one sees strong endorsements to the idea that markets provide an efficient way of allocating resources. Some years ago, opposite views on this issue used to be very popular (at least in Europe) and were held by similarly qualified people. In my opinion, the contribution of economics to this question can not be dismissed on the grounds that economics still in its infancy and that this question is a "practical" one (whatever this means). Economics started with similar naive ideas, two hundred years ago. In particular it has taken a long time to realize that competition does not work in such a smooth way as many classical writers thought it did, and that many facts can not be explained by the theory of perfectly competitive markets. This issue is explored at depth in the Introduction to this Lectures. In this sense the contribution of the Theory of industrial Organization has been to make a convincing case for the view that monopoly and oligopoly can persist in the long run in a world populated by rational agents. Despite of the fact that we are far from having a satisfactory theory of how markets work, progress has been immense, and we certainly understand why current theories are still not completely satisfactory.