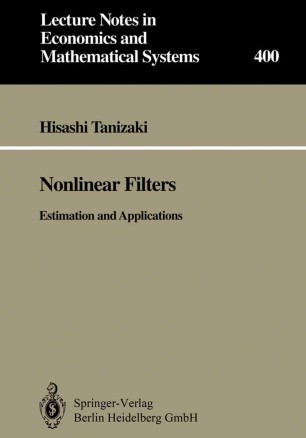 For a nonlinear filtering problem, the most heuristic and easiest approximation is to use the Taylor series expansion and apply the conventional linear recursive Kalman filter algorithm directly to the linearized nonlinear measurement and transition equations. First, it is discussed that the Taylor series expansion approach gives us the biased estimators. Next, a Monte-Carlo simulation filter is proposed, where each expectation of the nonlinear functions is evaluated generating random draws. It is shown from Monte-Carlo experiments that the Monte-Carlo simulation filter yields the unbiased but inefficient estimator. Anotherapproach to the nonlinear filtering problem is to approximate the underlyingdensity functions of the state vector. In this monograph, a nonlinear and nonnormal filter is proposed by utilizing Monte-Carlo integration, in which a recursive algorithm of the weighting functions is derived. The densityapproximation approach gives us an asymptotically unbiased estimator. Moreover, in terms of programming and computational time, the nonlinear filter using Monte-Carlo integration can be easily extended to higher dimensional cases, compared with Kitagawa's nonlinear filter using numericalintegration.