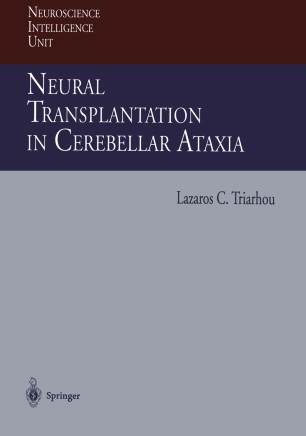 erebellar ataxia is a failure in muscular coordination that re­ C sults from a slow, progressive deterioration of neurons in the cerebellum. An estimated 150,000 people are affected by the he­ reditary ataxias and related disorders in the United States. At present, there is no known cure. In an experimental treatment aimed at reconstructing the damaged pathway through exog­ enous neuronal supplementation, genetically ataxic mice have been used for intracerebral grafting of genetically healthy cerebellar neuroblasts, and evidence has been obtained for graft-induced en­ hancement of behavioral responses after bilateral cerebellar grafts. Such results are encouraging and underscore the potential of the neural grafting technique in restoring cerebellar function. How­ ever, many of the pathological and biochemical mechanisms in the interaction between grafted tissue and the host brain need to be further elucidated in extensive experimental studies, and great cau­ tion must be used in contemplating the theoretical feasibility of a possible application in humans.