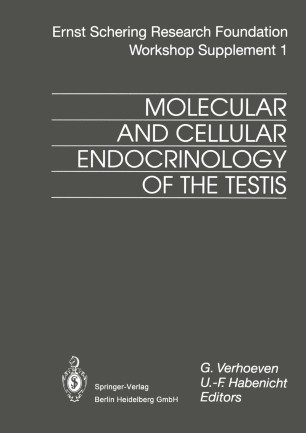 Molecular and Cellular Endocrinology of the Testis

The European Workshops on Molecular and Cellular Endocrinology of the Testis have become by now a well-established tradition. Thanks to their special format, the quality of the main lectures and miniposters, and the vivid discussions, they enjoy the ever-increasing interest and active participation of all European scientists working in the field. Moreover, since the very beginning they have attracted investigators from all over the world. The most recent "Testis Workshop" was held in De Panne, Belgium, from 27-3\ March, 1994. As always, the frame­ work of the workshop was provided by a series of lectures delivered by a panel of internationally recognized authorities. These lectures are ga­ thered in the present volume of the Ernst Schering Foundation Work­ shop series. Together with the Miniposter book they constitute an excel­ lent written account of the Proceedings of the 8th European Testis Workshop. The testis undoubtedly represents one of the most complex and in­ triguing tissues in the body. Both its endocrine function, the secretion of male sex hormones, and its exocrine role, the production of mature spermatozoa, continue to raise startling questions to clinicians, physi­ ologists, endocrinologists, and scientists involved in fundamental re­ search. Few organs maintain and support a differentiation process as complicated as spermatogenesis; few tissues continually display both mitotic and meiotic cell cyles in such a stringently controlled fashion or a comparable need for coordinated endocrine and local control.