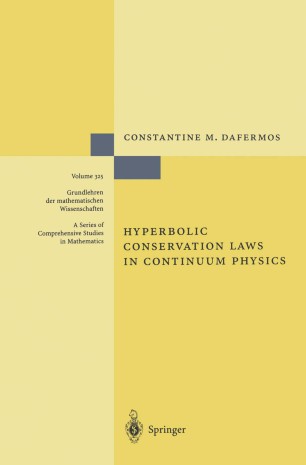 The seeds of Continuum Physics were planted with the works of the natural philosophers of the eighteenth century, most notably Euler; by the mid-nineteenth century, the trees were fully grown and ready to yield fruit. It was in this envi­ ronment that the study of gas dynamics gave birth to the theory of quasilinear hyperbolic systems in divergence form, commonly called "hyperbolic conserva­ tion laws"; and these two subjects have been traveling hand-in-hand over the past one hundred and fifty years. This book aims at presenting the theory of hyper­ bolic conservation laws from the standpoint of its genetic relation to Continuum Physics. Even though research is still marching at a brisk pace, both fields have attained by now the degree of maturity that would warrant the writing of such an exposition. In the realm of Continuum Physics, material bodies are realized as continuous media, and so-called "extensive quantities", such as mass, momentum and energy, are monitored through the fields of their densities, which are related by balance laws and constitutive equations. A self-contained, though skeletal, introduction to this branch of classical physics is presented in Chapter II. The reader may flesh it out with the help of a specialized text on the subject.