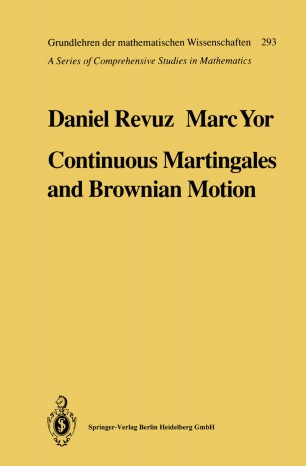 This book focuses on the probabilistic theory ofBrownian motion. This is a good topic to center a discussion around because Brownian motion is in the intersec­ tioll of many fundamental classes of processes. It is a continuous martingale, a Gaussian process, a Markov process or more specifically a process with in­ dependent increments; it can actually be defined, up to simple transformations, as the real-valued, centered process with independent increments and continuous paths. It is therefore no surprise that a vast array of techniques may be success­ fully applied to its study and we, consequently, chose to organize the book in the following way. After a first chapter where Brownian motion is introduced, each of the following ones is devoted to a new technique or notion and to some of its applications to Brownian motion. Among these techniques, two are of para­ mount importance: stochastic calculus, the use ofwhich pervades the whole book and the powerful excursion theory, both of which are introduced in a self­ contained fashion and with a minimum of apparatus. They have made much easier the proofs of many results found in the epoch-making book of Itö and McKean: Diffusion Processes and their Sampie Paths, Springer (1965).