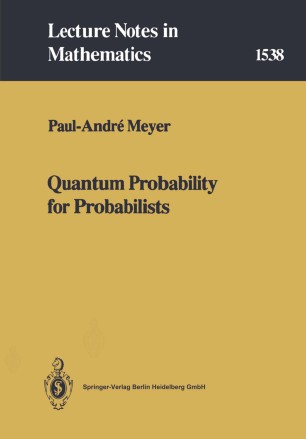 These notes contain all the material accumulated over six years in Strasbourg to teach "Quantum Probability" to myself and to an audience of commutative probabilists. The text, a first version of which appeared in successive volumes of the Seminaire de Probabilite8, has been augmented and carefully rewritten, and translated into international English. Still, it remains true "Lecture Notes" material, and I have resisted suggestions to publish it as a monograph. Being a non-specialist, it is important for me to keep the moderate right to error one has in lectures. The origin of the text also explains the addition "for probabilists" in the title : though much of the material is accessible to the general public, I did not care to redefine Brownian motion or the Ito integral. More precisely than "Quantum Probability" , the main topic is "Quantum Stochastic Calculus" , a field which has recently got official recognition as 81825 in the Math.