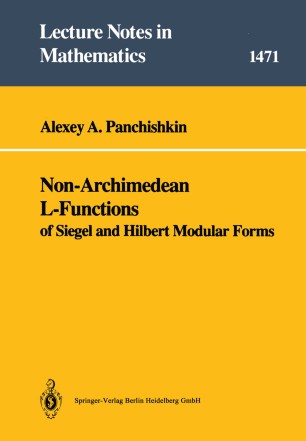 A new method of p-adic interpolation of these critical values is presented. An important class of p-adic L-functions treated in the present book are p-adic L-functions of Siegel modular forms having logarithmic growth (which were first introduced by Amice, Velu and Vishik in the elliptic modular case when they come from a good supersingular reduction of ellptic curves and abelian varieties). The given construction of these p-adic L-functions uses precise algebraic properties of the arihmetical Shimura differential operator.

The book could be very useful for postgraduate students and for non-experts giving a quick access to a rapidly developping domain of algebraic number theory: the arithmetical theory of L-functions and modular forms.

"The book is an updated version of the book ‘Non-Archimedean L-Functions of Hilbert and Siegel Modular Forms’ by Alexei Panchishkin published in 1991 … . The main subject of the book is the p-adic theory of L-functions of Siegel modular forms. … The basic new feature of this second version is the use of arithmetical nearly holomorphic Siegel modular forms … . The book will be very useful for postgraduate students and researchers entering this difficult area of research." (Andrzej Dabrowski, Zentralblatt MATH, Vol. 1070, 2005)