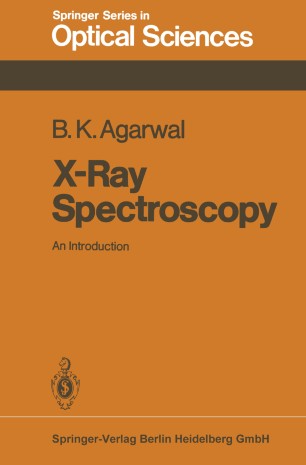 Rontgen's discovery of X-rays in 1895 launched a subject which became central to the development of modern physics. The verification of many of the predic­ tions of quantum theory by X-ray spectroscopy in the early part of the twen­ tieth century stimulated great interest in thi's area, which has subsequently influenced fields as diverse as chemical physics, nuclear physics, and the study of the electronic properties of solids, and led to the development of techniques such as Auger, Raman, and X-ray photoelectron spectroscopy. The improvement of the theoretical understanding of the physics underlying X-ray spectroscopy has been accompanied by advances in experimental techniques, and the subject provides an instructive example of how progress on both these fronts can be mutually beneficial. This book strikes a balance between his­ torical description, which illustrates this symbiosis, and the discussion of new developments. The application of X-ray spectroscopic methods to the in­ vestigation of chemical bonding receives special attention, and an up-to-date account is given of the use of extended X-ray absorption fine structure (EXAFS) in determining interatomic distances, which has attracted much attention dur­ ing the last decade. This monograph is intended to be used as a basic text for a one-year course at postgraduate level, and aims to provide the general background that is es­ sential to enable the reader to participate fruitfully in the growing research activity in this field.