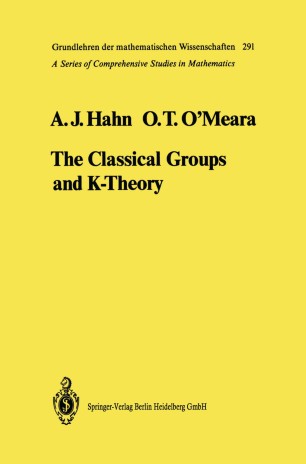 The Classical Groups and K-Theory

It is a great satisfaction for a mathematician to witness the growth and expansion of a theory in which he has taken some part during its early years. When H. Weyl coined the words "classical groups", foremost in his mind were their connections with invariant theory, which his famous book helped to revive. Although his approach in that book was deliberately algebraic, his interest in these groups directly derived from his pioneering study of the special case in which the scalars are real or complex numbers, where for the first time he injected Topology into Lie theory. But ever since the definition of Lie groups, the analogy between simple classical groups over finite fields and simple classical groups over IR or C had been observed, even if the concept of "simplicity" was not quite the same in both cases. With the discovery of the exceptional simple complex Lie algebras by Killing and E. Cartan, it was natural to look for corresponding groups over finite fields, and already around 1900 this was done by Dickson for the exceptional Lie algebras G and E • However, a deep reason for this 2 6 parallelism was missing, and it is only Chevalley who, in 1955 and 1961, discovered that to each complex simple Lie algebra corresponds, by a uniform process, a group scheme (fj over the ring Z of integers, from which, for any field K, could be derived a group (fj(K).