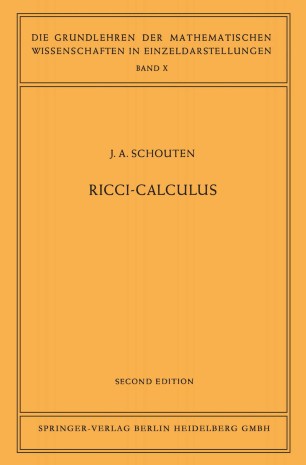 An Introduction to Tensor Analysis and Its Geometrical Applications

This is an entirely new book. The first edition appeared in 1923 and at that time it was up to date. But in 193 5 and 1938 the author and Prof. D. J. STRUIK published a new book, their Einführung I and li, and this book not only gave the first systematic introduction to the kernel­ index method but also contained many notions that had come into prominence since 1923. For instance densities, quantities of the second kind, pseudo-quantities, normal Coordinates, the symbolism of exterior forms, the LIE derivative, the theory of variation and deformation and the theory of subprojective connexions were included. Now since 1938 there have been many new developments and so a book on RICCI cal­ culus and its applications has to cover quite different ground from the book of 1923. Though the purpose remains to make the reader acquainted with RICCI's famous instrument in its modern form, the book must have quite a different methodical structure and quite different applica­ tions have to be chosen. The first chapter contains algebraical preliminaries but the whole text is modernized and there is a section on hybrid quantities (quantities with indices of the first and of the second kind) and one on the many abridged notations that have been developed by several authors. In the second chapter the most important analytical notions that come before the introduction of a connexion aredealt with in full.