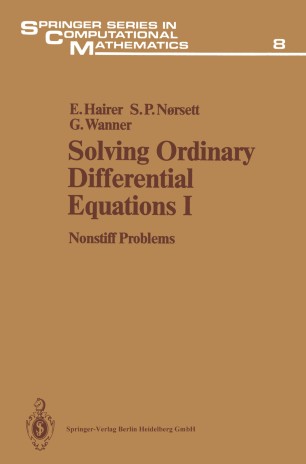 "So far as I remember, I have never seen an Author's Pre­ face which had any purpose but one - to furnish reasons for the publication of the Book. " (Mark Twain) "Gauss' dictum, "when a building is completed no one should be able to see any trace of the scaffolding," is often used by mathematicians as an excuse for neglecting the motivation behind their own work and the history of their field. For­ tunately, the opposite sentiment is gaining strength, and numerous asides in this Essay show to which side go my sympathies. " (B. B. Mandelbrot, 1982) 'This gives us a good occasion to work out most of the book until the next year. " (the Authors in a letter, dated c. kt. 29, 1980, to Springer Verlag) There are two volumes, one on non-stiff equations, now finished, the second on stiff equations, in preparation. The first volume has three chapters, one on classical mathematical theory, one on Runge­ Kutta and extrapolation methods, and one on multistep methods. There is an Appendix containing some Fortran codes which we have written for our numerical examples. Each chapter is divided into sections. Numbers of formulas, theorems, tables and figures are consecutive in each section and indi­ cate, in addition, the section number, but not the chapter number. Cross references to other chapters are rare and are stated explicitly. The end of a proof is denoted by "QED" (quod erat demonstrandum).