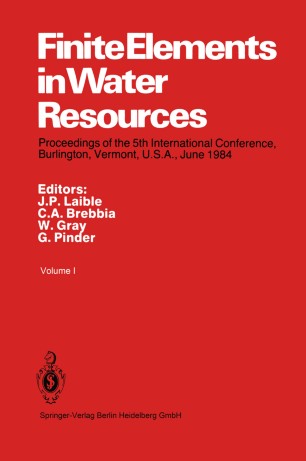 This book is the edited proceedings of the Fifth International Conference on Finite Elements in Water Resources, held at the University of Vermont, USA in June 1984. This Conference cont­ inues the successful series started at Princeton University in 1976, followed by the Conference in Imperial College, London, UK in 1978, the third Conference at the University of Mississippi, USA in 1980 and the fourth at the University of Hannover, Germany in 1982. The objective of this Conference is to provide engineers and scientists interested in water resources with the state-of-t- art on finite element modelling. The Proceedings review the basic theory and applications of the technique in groundwater and seepage, transport phenomena, viscous flow, river, lake and ocean modelling. The fundamentals of the numerical techniques employed in finite elements are also discussed. Many applications illus­ trate the versatility and generality of the Finite Element Method for the simulation of a wide range of problems in water resources. More recent schemes, in particular, boundary elements, are also presented, together with a series of advanced numerical techniques. The Conference has become an internationally accepted forum for the presentation of new developments of finite elements in water resources techniques. Because of this, a large number of abstracts were submitted to the Organizing Committee and it is our only reg­ ret that it was impossible to accept all these contributions. The overwhelming response to our Call for Papers has ensured the high quality of these proceedings.