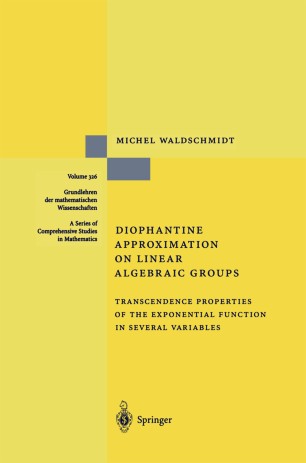 Transcendence Properties of the Exponential Function in Several Variables

The theory of transcendental numbers is closely related to the study of diophantine approximation. This book deals with values of the usual exponential function e^z. A central open problem is the conjecture on algebraic independence of logarithms of algebraic numbers. This book includes proofs of the main basic results (theorems of Hermite-Lindemann, Gelfond-Schneider, 6 exponentials theorem), an introduction to height functions with a discussion of Lehmer's problem, several proofs of Baker's theorem as well as explicit measures of linear independence of logarithms. An original feature is that proofs make systematic use of Laurent's interpolation determinants. The most general result is the so-called Theorem of the Linear Subgroup, an effective version of which is also included. It yields new results of simultaneous approximation and of algebraic independence. 2 chapters written by D. Roy provide complete and at the same time simplified proofs of zero estimates (due to P. Philippon) on linear algebraic groups.