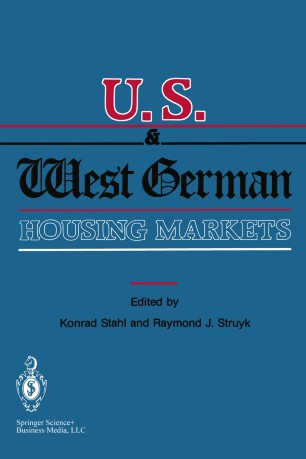 For many years countries have taken advantage of one another's experiences in formulating social policies and even in designing specific interventions. Often such transfers have occurred on a fairly casual level; sometimes greater rigor has been present. In either case, the goal has been to learn from previous experience-at least to avoid repeating the mistakes of the past. In light of the promise that such intercountry transfers hold, it is somewhat surprising that so little energy has gone into careful analytic work on the behavior of households in differing countries and how they respond to various changes, especially those resulting from shifts in public policy. This lack of careful analysis was a major force that motivated The Urban Institute to establish an international studies program in 1982. This volume represents one of the early products of the collaborative efforts that this initiative has spawned. The results of the comparison of the housing markets in West Germany and the United States presented here offer examples of the type of unexpected conclusions that may emerge from careful analyses as well as more anticipated outcomes. Despite the many similarities in the economies of the United States and West Germany and the general free-market orientation of their housing sectors, the papers in this volume document important differences in the way households make decisions about their housing and the consequences of these decisions.