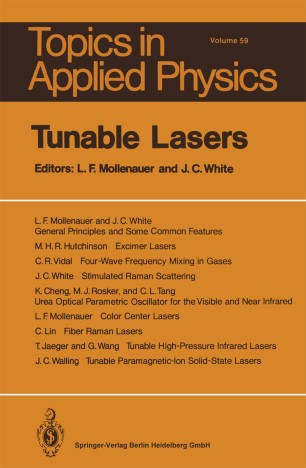 Ever since the invention of the laser itself, the spectroscopist has dreamed of lasers that could be tuned continuously over whatever set of resonances he wished to study. Two developments of the mid-1960s - the optical paramet­ ric oscillator and the dye laser - were the first to begin to fulfill that dream. The cw dye laser, with its ability to produce extremely narrow linewidths, was particularly successful and revitalized the study of atomic physics. Other, complementary developments soon followed. These included the excimer, color center, and high pressure gas lasers, as well as Raman shifting and four wave mixing techniques for further extending the tuning ranges of such primary tunable laser sources. By the end of the 1970s, continuously or quasi-continuously tunable coherent sources were thus available for the visible and the near infrared, and a good part of the ultraviolet and the far infrared. Despite the existence of a number of excellent treatises on individual tech­ nologies, to the best of our knowledge, no one has yet attempted to survey the entire field of tunable lasers in a single volume. The purpose of this book is to fill that void. It is particularly aimed at those who are not necessarily laser ex­ perts, but who may wish to discover quickly and with a minimum of effort the best technology to satisfy a particular problem, and what the possibilities and limitations of that technology are.