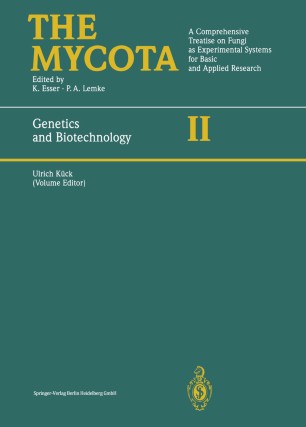 Part of the The Mycota book series (MYCOTA, volume 2)

Mycology, the study of fungi, originated as a subdiscipline of botany and was a descriptive discipline, largely neglected as an experimental science until the early years of this century. A seminal paper by Blakeslee in 1904 provided evidence for self­ incompatibility, termed "heterothallism", and stimulated interest in studies related to the control of sexual reproduction in fungi by mating-type specificities. Soon to follow was the demonstration that sexually reproducing fungi exhibit Mendelian inheritance and that it was possible to conduct formal genetic analysis with fungi. The names Burgeff, Kniep and Lindegren are all associated with this early period of fungal genetics research. These studies and the discovery of penicillin by Fleming, who shared a Nobel Prize in 1945, provided further impetus for experimental research with fungi. Thus began a period of interest in mutation induction and analysis of mutants for bio­ chemical traits. Such fundamental research, conducted largely with Neurospora crassa, led to the one gene: one enzyme hypothesis and to a second Nobel Prize for fungal research awarded to Beadle and Tatum in 1958. Fundamental research in biochemical genetics was extended to other fungi, especially to Saccharomyces cere­ visiae, and by the mid-1960s fungal systems were much favored for studies in eukaryotic molecular biology and were soon able to compete with bacterial systems in the molecular arena.