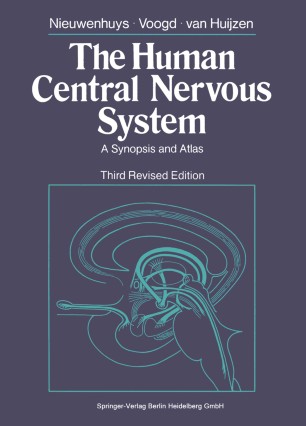 A Synopsis and Atlas

The present edition of our The Human Central Nervous System: A Synopsis and Atlas differs in several respects from its predecessor. An entirely new section on the cerebrovascular system and the meninges has been added, in accordance with the wishes of many colleagues. The text has been thoroughly revised and extended in the light of new data and concepts. The functional significance of the structures discussed and depicted has received more atten­ tion, and numerous correlations with neuropathology and clinical neurology have been indicated. The final section in the previous editions was devoted to the monoaminergic neuron systems. It was our original plan to add sections on other important transmitter-specified neuronal populations. However, the size of these sections soon grew well beyond the limits set for the present work. Hence, it was decided to produce a separate text on that subject, which has appeared in the mean time (R.NIEUWENHUYS: Chemoarchitecture of the Brain, Springer­ Verlag 1985). The reader who is particularly interested in chemical neuroana­ tomy is referred to that work; numerous data on the nature of the neurotrans­ mitters present in the various centres and fibre systems of the neuraxis are incorporated in the text of the present book, however.