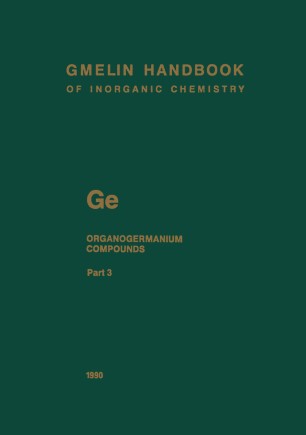 The significance of organometallic chemistry has constantly increased during the second half of this century. The Gmelin Institute recognizes this fact in publishing an entire series on organometallic compounds, listed in the Complete Catalog. Within this series the description of the organogermanium compounds has started, of which already two volumes have been published. The present third volume in the organogermanium series describes the remainder of GeR3R' compounds, all other types of tetraorganogermanium compounds, from GeR2R'2 to GeRR'R"R"', germacyclic compounds of various ring sizes, including spiro compounds, and compounds with low-coordinate germanium atoms such as GeR3 radicals, germylenes, and germanocenes. The volume concludes with an empirical formula index.