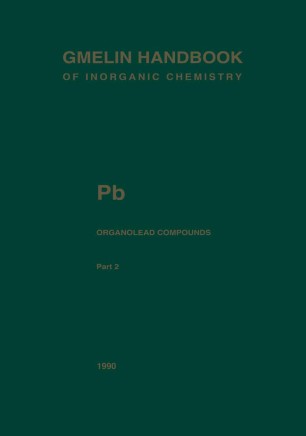 The discovery in 1922 of the exceptional effectiveness of tetraethyllead in suppressing knock in the combustion of gasoline in engines and its introduction as a gasoline additive in 1923 stimulated an enormous number of studies on procedures for its synthesis and industrial production, on its behavior and uses, and also on the toxicology of this compound and on its environmental impact resulting from large scale lead distribution. The results of these investigations are collected in more than 3000 papers and patents. The quantity of information on this prominent compound fills the second volume of the series on organo­ lead compounds. Complete literature coverage was strived for but not all of the voluminous patent data have been considered. Certain publications on production of tetraethyllead or on use as a gasoline additive that are not reported in Chemical Abstracts (C.A.) may not have been found; similarly, publications that could not be clearly identified as relevant to the subject might be missing. Publications concerning the fate of inorganic lead compounds that are products of the combustion of leaded gasoline as weil as the vast amount of related papers on analytical and toxicological studies and on health and environmental aspects have been deliberately omitted. The literature is covered through 1988; C.A. has been evaluated through volume 110 of 1989.