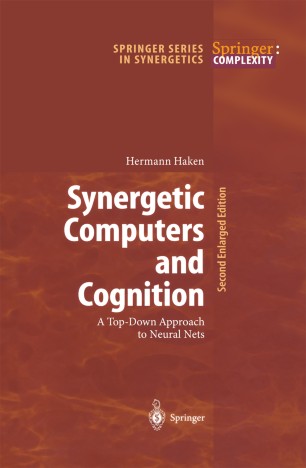 A Top-Down Approach to Neural Nets

This book presents a novel approach to neural nets and thus offers a genuine alternative to the hitherto known neuro-computers. This approach is based on the author's discovery of the profound analogy between pattern recognition and pattern formation in open systems far from equilibrium. Thus the mathematical and conceptual tools of synergetics can be exploited, and the concept of the synergetic computer formulated. A complete and rigorous theory of pattern recognition and learning is presented. The resulting algorithm can be implemented on serial computers or realized by fully parallel nets whereby no spurious states occur. Explicit examples (recognition of faces and city maps) are provided. The recognition process is made invariant with respect to simultaneous translation, rotation, and scaling, and allows the recognition of complex scenes. Oscillations and hysteresis in the perception of ambiguous patterns are treated, as well as the recognition of movement patterns. A comparison between the recognition abilities of humans and the synergetic computer sheds new light on possible models of mental processes. The synergetic computer can also perform logical steps such as the XOR operation. The new edition includes a section on transformation properties of the equations of the synergetic computer and on the invariance properties of the order parameter equations. Further additions are a new section on stereopsis and recent developments in the use of pulse-coupled neural nets for pattern recognition.