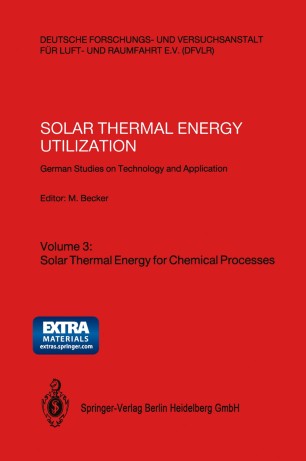 The energy crisis in 1973 and 1979 initiated a great number of activities and programs for low and high temperature applica­ tion of solar energy. Synthetic fuels and chemicals produced by solar energy is one of them, where temperatures in the range of 600-1000°C or even higher are needed. In principle such high temperatures can be produced in solar towers. For electricity production, the feasibility and operation of solar tower plants has been examined during the SSPS - project (Small Solar Power System) in Almeria, Spain. The objective of Solar Thermal Energy Utilization is to extend the experience from the former SSPS - program in to the field of solar produced synthetic fuels. New materials and technolo­ gies have to be developed in order to research this goal. Metallic components now in use for solar receivers need to be improved with respect to transient operation or possibly replaced by ceramics. High temperature processes, like steam-methane reforming, coal conversion and hydrogen produc­ tion need to be developed or at least adapted for the unconven­ tional solar operation. Therefore Solar Thermal Energy Utiliza­ tion is a long term program, which needs time for its develop­ ment much more time than the intervals expected in between further energy crisis. The "Studies on Technology and Applica­ tion on Solar Energy Utilization" is a necessary step in the right direction in order to prepare for the energy problems in the future.