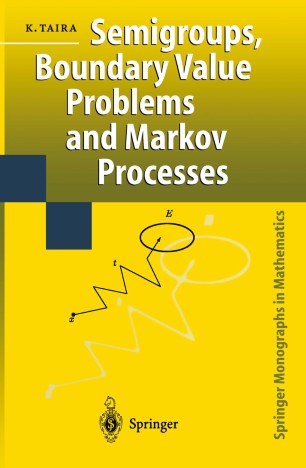 The purpose of this book is to provide a careful and accessible account along modern lines of the subject wh ich the title deals, as weIl as to discuss prob­ lems of current interest in the field. Unlike many other books on Markov processes, this book focuses on the relationship between Markov processes and elliptic boundary value problems, with emphasis on the study of analytic semigroups. More precisely, this book is devoted to the functional analytic approach to a class of degenerate boundary value problems for second-order elliptic integro-differential operators, called Waldenfels operators, whi:h in­ cludes as particular cases the Dirichlet and Robin problems. We prove that this class of boundary value problems provides a new example of analytic semi­ groups both in the LP topology and in the topology of uniform convergence. As an application, we construct a strong Markov process corresponding to such a physical phenomenon that a Markovian particle moves both by jumps and continuously in the state space until it "dies" at the time when it reaches the set where the particle is definitely absorbed. The approach here is distinguished by the extensive use of the techniques characteristic of recent developments in the theory of partial differential equa­ tions. The main technique used is the calculus of pseudo-differential operators which may be considered as a modern theory of potentials.