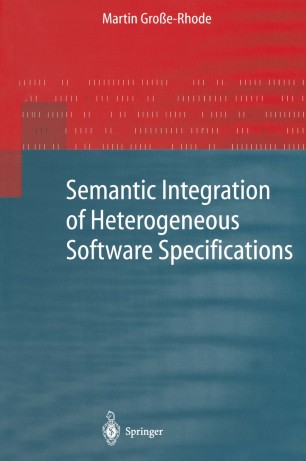 In a model-based development of software systems different views on a system are elaborated using appropriate modeling languages and techniques. Because of the unavoidable heterogeneity of the viewpoint models, a semantic integration is required, to establish the correspondences of the models and allow checking of their relative consistency.

The integration approach introduced in this book is based on a common semantic domain of abstract systems, their composition and development. Its applicability is shown through semantic interpretations and compositional comparisons of different specification approaches. These range from formal specification techniques like process calculi, Petri nets and rule-based formalisms to semiformal software modeling languages like those in the UML family.

"This book targets an urgent need, to evolve methods that allow developers to integrate software specifications that are related … . The book is well organized and neatly written … . Examples, when provided are appropriate. … The book will surely be a good reference book for researchers and practitioners of model-driven software development … . The effort by the author to illustrate and extend the approach to UML is clearly a step in the right direction … ." (Srini Ramaswamy, Computing Reviews, February, 2005)