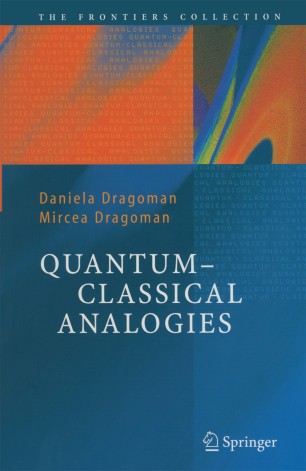 This is the first book on the subject of quantum-classical analogies. Although quantum and classical physics are founded on very different principles, similarities between quantum and classical phenomena are not uncommon. This fact was considered by physicists as a mere curiosity until, quite recently, it became clear that such analogies between quantum and classical physics can be exploited in theoretical as well as experimental work in emerging research areas such as quantum computing, nano-devices or unconventional light forms (localized light, frozen light). The analogies described in this book include the well-known mathematical similarity between the Schrödinger equation and the Helmholtz equation (and its application in nanodevice design), the similarities between quantum multi-level systems and their optical counterparts, the optical analogue of the uncertainty relation, and the optical implementations of quantum computing algorithms. Acoustic analogies to quantum phenomena are also mentioned. Last but not least, the book describes the mathematical analogies between classical and quantum phase space physics.

"The main role of quantum classical analogies presented in ten distinct chapters is to shed some light on the genuine significance of the quantum and classical worlds. … The book addresses a large category of readers, especially graduates and PhD students … . The book is also useful for researchers working in advanced topics … . It can be used as an additional source for a course on quantum mechanics … . The hard cover book is nicely edited … ." (Roland Carchon, Physicalia, Vol. 57 (3), 2005)

"The authors … devote their new book to the striking analogies between classical and quantum physics. … the authors wish to show that the classical and quantum worlds share many common concepts despite striking differences. … The wealth of analogies … discovered and presented in ten distinct chapters sheds some light on the genuine significance of both the quantum world and its classical counterpart. The book addresses students and researchers alike specialising in the study of quantum devices, atom optics or quantum optics." (Gert Roepstorff, Zentralblatt MATH, Vol. 1093 (19), 2006)

"Analogies are a powerful cognitive tool that allow us to make inferences and learn new aspects from the comparison of two things by highlighting their similarities. … It is important to mention that the book is intended to be a catalogue of phenomena shared between classical and quantum physics … . the references given are an invaluable asset. … This book is therefore a very good choice for those interested in bridging ideas from classical physics into the quantum world or vice versa." (Dr. J. Rogel-Salazar, Contemporary Physics, Vol. 46 (6), 2005)

"This book develops and explores in a systematic manner a large number of analogs between quantum and classical theories. … It follows closely the recent experimental developments, and for each chapter there is a large number of current references. … It will be very valuable for a large category of readers ranging from graduate and Ph. D. students to researchers working in these areas, and on to teachers looking for nontrivial modern applications and developments in both quantum and classical physics." (Vitor R. Vieira, Mathematical Reviews, Issue 2007 c)