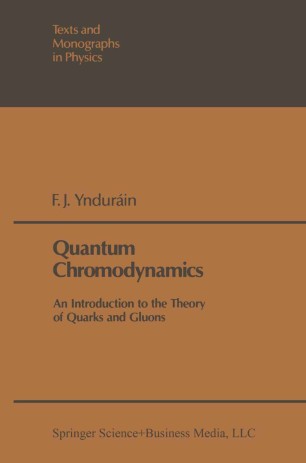 An Introduction to the Theory of Quarks and Gluons

It has been almost thirty years since Yang and Mills (1954) performed their pioneering work on gauge theories, and it is probably safe to say that we have in our hands a good candidate for a theory of the strong interactions, based precisely on a non-Abelian gauge theory. While our understanding of quantum chromodynamics (QCD) is still incomplete, there have been sufficient theoretical developments, many of them enjoying a degree of support from experimental evidence, to justify a reasonably systematic treatise on the subject. Of course, no presentation of QCD can claim to be complete, since the theory is still in the process of elaboration. The selection of topics reflects this: I have tried to discuss those parts of the theory that are more likely to endure, and particularly those developments that can, with a minimum of rigor, be derived from "first principles." To be sure, prejudice has also influenced my choice: one necessarily tends to give more attention to subjects with which one is familiar, and to eschew unfamiliar ones. I will not pause here to point out topics which perhaps should have been included* (see, however, Section 46); the list of references should fill in the gaps. "The one I regret most is lattice QCD. At the time I wrote the first draft of this book, lattice QCD had not undergone the spectacular development we have recently witnessed.