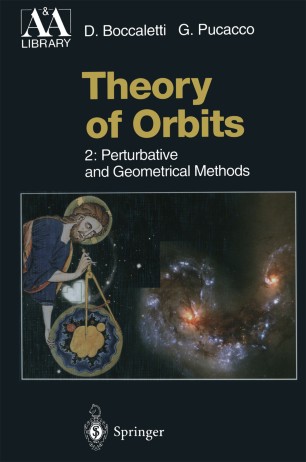 Theory of Orbits treats celestial mechanics as well as stellar dynamics from the common point of view of orbit theory, making use of concepts and techniques from modern geometric mechanics. It starts with elementary Newtonian mechanics and ends with the dynamics of chaotic motion. The two volumes are meant for students in astronomy and physics alike. Prerequisite is a physicist's knowledge of calculus and differential geometry.
The first three chapters of this second volume are devoted to the theory of perturbations, starting from classical problems and arriving at the KAM theory, and to the introduction of the use of the Lie transform. A whole chapter treats the theory of adiabatic invariants and its applications in celestial mechanics and stellar dynamics. Also the theory of resonances is illustrated and applications in both fields are shown. Classical and modern problems connected to periodic solutions are reviewed. The description of modern developments of the theory of chaos in conservative systems is the subject of a chapter in which an introduction is given to what happens in both near-integrable and non-integrable systems. The invaluable help provided by computers in the exploration of the long-time behaviour of dynamical systems is acknowledged in a final chapter, where some numerical algorithms and their applications both to systems with few degrees of freedom and to large N-body systems are illustrated.

From the reviews
"The book is ... didactically written and contains topics from classical to most modern ones, treated rigorously by indicating where complete proofs are to be found."
Zentralblatt für Mathematik, 1999
Buy options