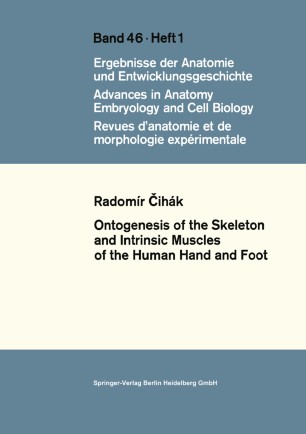 The aim of the present publication is to summarize the results of studies of ontogenesis of the skeleton and muscles of the human hand and foot. Our primary interest in studying the muscles arose from observations of variations, in which a new form of the anomalous muscle in the popliteal fossa had been described (Cihak, 1954; Hnevkovsky and Cihak, 1957) and in which changes of muscle forms in the congenitally malformed extremity had also been studied (Brlickova and Cihak, 1956). The desire to clarify muscle variations by means of the onto­ genesis led to a study of ontogenesis of single muscles. During observation of the embryonic pectoralis major special muscle bundles were primarily observed, which could be homologised with the sphincter colli muscle of lower Mammals. Further observation revealed that this muscle (concordantly with its phylo­ genetic development) gradually develops in the course of human ontogenesis from a small primordium to its maximal extent and becomes reduced thereafter and finally disappears, still during the embryonic period (Cihak, 1957). This study was decisive for the further development of our theme, since it demonstra­ tes, how consistently in the development of the locomotor apparatus the rule of recapitulation is asserted and how this can be employed in developmental studies of muscles.