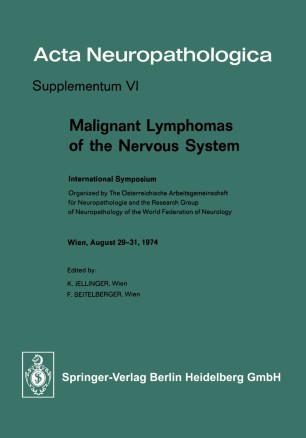 Malignant Lymphomas of the Nervous System

More than 150 years have passed since involvement of the nervous system in leukemia was first reported by BURNS, while the possibility of the primary brain tumor derived from the lymphoreticular tissue was recognized much later. BAILEY in 1929 described such neoplasms under the term perithelial sarcoma. Later these tumors of the nervous system have been variously designated as "Perivascular of perithelial sarcomas, reticulum cell sarcomas or microgliomas", as controversy has evolved and still exists on the definition of this group of neoplasms and on the nature of their cells of origin. Much of the unfortunate confusion concerning the neoplastic lesions attributed to "microglia" and other derivations of the RE system arose because their close relationship to extra­ neural cells has been ignored. On the other hand, communication in the field of malignant lymphomas has become increasingly difficult because of the termino­ logic maze and conceptual diversities of traditional morphological classifica­ tions that have limited valid comparisons. Although at present we are still far from a precise recognition of the basic features of lymphoproliferative processes and from a fairly general agreement on the terminology of non-Hodgkin lymphomas, there is encouraging evidence recently of some enlightment on the nature of tumor cells that provides the basis for a reasonable and generally acceptable lymphoma classification.