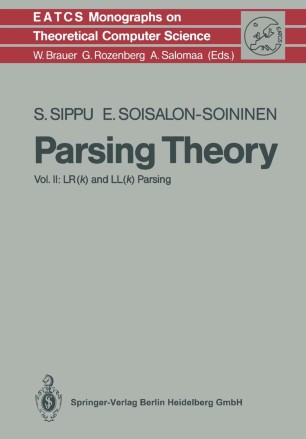 This work is Volume II of a two-volume monograph on the theory of deterministic parsing of context-free grammars. Volume I, "Languages and Parsing" (Chapters 1 to 5), was an introduction to the basic concepts of formal language theory and context-free parsing. Volume II (Chapters 6 to 10) contains a thorough treat­ ment of the theory of the two most important deterministic parsing methods: LR(k) and LL(k) parsing. Volume II is a continuation of Volume I; together these two volumes form an integrated work, with chapters, theorems, lemmas, etc. numbered consecutively. Volume II begins with Chapter 6 in which the classical con­ structions pertaining to LR(k) parsing are presented. These include the canonical LR(k) parser, and its reduced variants such as the LALR(k) parser and the SLR(k) parser. The grammarclasses for which these parsers are deterministic are called LR(k) grammars, LALR(k) grammars and SLR(k) grammars; properties of these grammars are also investigated in Chapter 6. A great deal of attention is paid to the rigorous development of the theory: detailed mathematical proofs are provided for most of the results presented.