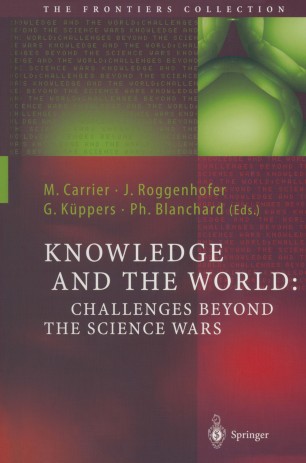 Knowledge and the World: Challenges Beyond the Science Wars

The fundamental question of whether, or in what sense, science informs us about the real world has pervaded the history of thought since antiquity. Is what science tells us about the world determined unambiguously by facts, or does the content of any scientific theory in some way depend on the human condition? "Sokal’s hoax" attacked the mere seriousness of post-modern views of science and shifted this controversial debate to a new level, which very quickly came to be known as "Science Wars".

"Knowledge and the World" examines and reviews the broad range of philosophical positions on this issue, extending from realism to relativism, to expound the epistemic merit of  science, and to tackle the central question: in what sense can science justifiably claim to provide a truthful portrait of reality? Challenges beyond the Science Wars are taken up by contributions of scientists, sociologists and philosophers of science, which connect perspectives of a wide variety of disciplines (including biology and cultural studies). This book addresses everyone interested in the philosophy and history of science, and in particular in the interplay between the social and natural sciences.

"This book is a collection of 14 technical essays by 15 authors … . Its main concern is discussions on (1) whether what science tells us about the universe is determined unambiguously by experimental data/facts or (2) whether scientific theory and its related experimental procedures are …dependent upon human strengths and weaknesses. … A novel feature of this volume is the inclusion of significant cultural studies and biological studies. Overall, the book is a useful source of ideas in the need of formalization." (Albert A. Mullin, Zentralblatt MATH, Vol. 1064, 2005)