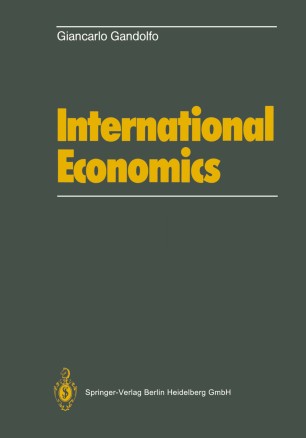 There is no lack of good international economics textbooks ranging from the elementary to the advanced, so that an additional drop in this ocean calls for an explanation. In the present writer's opinion, there seems still to be room for a textbook which can be used in both undergraduate and graduate courses, and which contains a wide range of topics, including those usually omitted from other textbooks. These are the intentions behind the present book, which is an outcrop from undergraduate and graduate courses in international economics that the author has been holding at the University of Rome since 1974, and from his on­ going research work in this field. Accordingly the work is organized as two-books­ in-one by distributing the material between text and appendices. The treatment in the body of this book is directed to undergraduate students and is mainly confined to graphic analysis and to some elementary algebra, but it is assumed that the reader will have a good knowledge of basic microeconomics and macroeconomics (so that the usual review material on production functions, indifference curves, standard Keynesian model, etc. , etc. has been omitted) . Each chapter is followed by an appendix in which the treatment is mainly mathematical, and where (i) the topics explained in the text are treated at a level suitable for advanced undergraduate or first-year graduate students and (ii) generalizations and/or topics not treated in the text (including some of those at the frontiers of research) are formally examined.