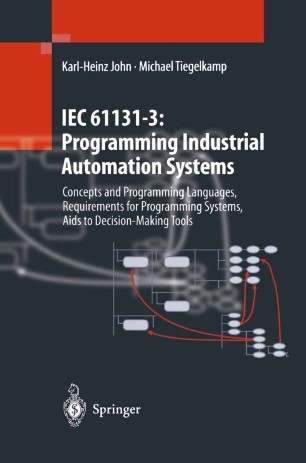 The programming of industrial controllers has developed into a fully-fledged engineering discipline in its own right over the last few years. It soon became apparent that the concepts and languages used in office automation were not equal to the task. "Rugged software" and fast adaptability are just two examples of the additional demands made by industrial automation technology. To standardise a variety of modern concepts and languages for the benefit of users, the International Electrotechnical Commission (IEC) developed a standard for using industrial controllers. Based on experience with cxisting PLC languages, five programming languages were defined, together with a data concept using modern software development methods. This book introduces these new programming concepts, assesses the value of the standard in the industrial context, and provides achecklist to enable users to appraise the functionality of a programming system. It also includes two free programming packages on CD-ROM, inviting the reader to try out IEC 61131 programming. The IEC 61131 programming systems OpenPCS and STEP 7 are supplied by infoteam Software GmbH (www.infoteam.de) and SIEMENS AG ( www.siemens.de ). This book is the product of more than 15 years of experience in the development of PLC programming systems, especially a number of IEC systems. The purpose of writing it was not only to present the user with the formal language structure, but also to explain the concepts and methods underlying the different languages.