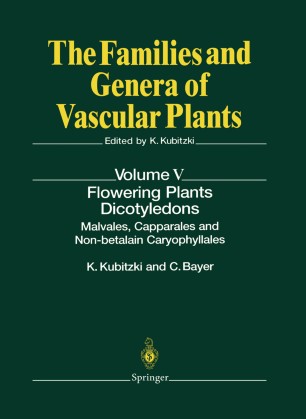 Part of the The Families and Genera of Vascular Plants book series (FAMILIES GENERA, volume 5)

When more than two decades ago this series was planned, classi?cation at the level of higher categories was rather contentious and considered to be of little concern for this book series. Through the advancement of molecular systematics within the last decade, the outlines of a phylogenetically based family scheme of angiosperms have become ava- able. This phylogenetic scheme for the ?rst time made meaningful broader comparisons feasible and is adopted here as a guideline for the circumscription of major blocks of families. However,due to the fragility of formal higher level classi?cation only one ca- gory above the rank of family,that of order,will be used in this volume. Despite the great progress in the understanding of broader phylogenetic relationships made during the last years, the circumscription of many families, let alone of genera, is still far from being settled and, in the contributions to this volume, the arrangement of genera within families is often phenetic rather than phylogenetic. This dif?culty is p- ticularly acute in larger families, and despite much molecular work that has been c- ducted in Cruciferae,the authors of that family account to this volume felt it premature to provide a formal subdivision of the group. Also,in other families,and particularly in Malvaceae-Malvoideae, the arrangement and circumscription of genera, for lack of a better alternative,are largely phenetic. Nevertheless,it is hoped that the classi?cation p- sented here is an advance over what had been known previously.