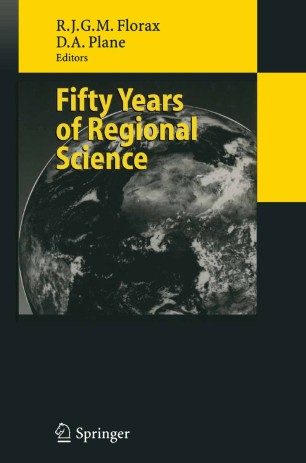 This book contains the complete text of the special Golden Anniversary issue of the flagship journal of the Regional Science Association International (RSAI), Papers in Regional Science (Volume 83, Number 1), as well as the full text of Walter Isard's Presidential Address "The future (near and far) of regional science". Professor Isard originally delivered the speech in a special plenary session of the fiftieth North American Meetings of the Regional Science Association International. The session began with a ceremonial kickoff to the year-long celebration of the multidisciplinary field's first 50 years. At the ceremony, held on the morning of Friday, November 21,2004 at the DoubleTree Hotel in Philadelphia, we presented Walter Isard, the founder of our multidisciplinary field, as well as Antoine Bailly, the President of the Regional Science Association International, and David Boyce, the Association's Archivist, with commemorative first copies of the anniversary issue. This book, entitled Fifty Years of Regional Science, consists of a compendium of "thought" papers authored by a representative sampling of some of the field's leading scholars. For the special journal issue we originally titled the collection: "The Brightest of Dawns".