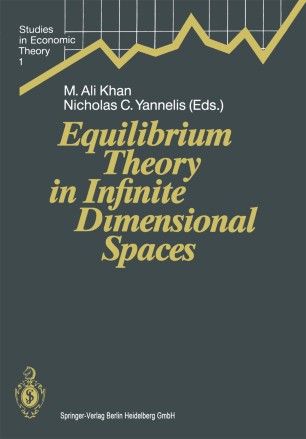 Apart from the underlying theme that all the contributions to this volume pertain to models set in an infinite dimensional space, they differ on many counts. Some were written in the early seventies while others are reports of ongoing research done especially with this volume in mind. Some are surveys of material that can, at least at this point in time, be deemed to have attained a satisfactory solution of the problem, while oth­ ers represent initial forays into an original and novel formulation. Some furnish alternative proofs of known, and by now, classical results, while others can be seen as groping towards and exploring formulations that have not yet reached a definitive form. The subject matter also has a wide leeway, ranging from solution concepts for economies to those for games and also including representation of preferences and discussion of purely mathematical problems, all within the rubric of choice variables belonging to an infinite dimensional space, interpreted as a commodity space or as a strategy space. Thus, this is a collective enterprise in a fairly wide sense of the term and one with the diversity of which we have interfered as little as possible. Our motivation for bringing all of this work under one set of covers was severalfold.