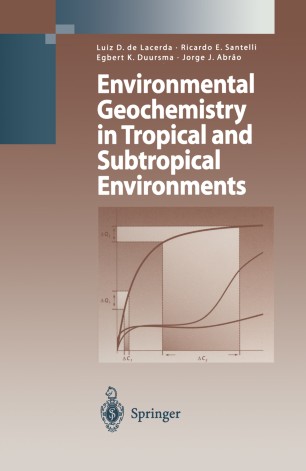 Three symposia on environmental geochemistry in tropical countries, held in Niter6i, Brazil (1993), in Cartagena, Colombia (1996) and in Nova Friburgo, Brazil (1999), made it very clear that tropical geochemistry is of world standard and fast increasing in multi disciplinarily and impact on important geochemical paradigms. It has additionally strong links with the economy of tropical countries, such as mining and industrialisa­ tion and is in full development for treating environmental problems caused by human activities of urban or industrial origin. We must compliment Prof. Jorge Abriio and his colleagues in Brazil and Dr. Gloria Prieto and her colleagues in Colombia for these ini­ tiatives. The participation of respectively 180 and 150 scientists, coming from 15 different countries for the first and second symposia, has shown that a large interest exists for tropical environmental geochemistry. It also demonstrates the necessity to understand tropical environmental problems. The organisation of a large international symposium is not possible without the assistance of state and federal authorities, for which those of Brazil and Colombia have to be complimented. The 3rd Symposium on Environmental Geochemistry in Tropical Countries was the last of the series and was attended by 22 countries and 170 participants and treated a number of related environmental and economic problems.