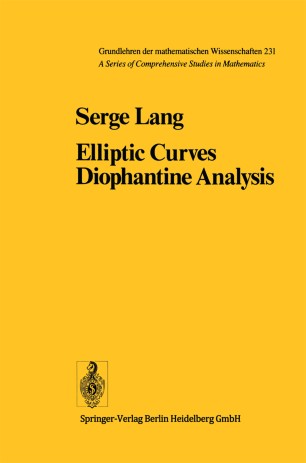 It is possible to write endlessly on elliptic curves. (This is not a threat.) We deal here with diophantine problems, and we lay the foundations, especially for the theory of integral points. We review briefly the analytic theory of the Weierstrass function, and then deal with the arithmetic aspects of the addition formula, over complete fields and over number fields, giving rise to the theory of the height and its quadraticity. We apply this to integral points, covering the inequalities of diophantine approximation both on the multiplicative group and on the elliptic curve directly. Thus the book splits naturally in two parts. The first part deals with the ordinary arithmetic of the elliptic curve: The transcendental parametrization, the p-adic parametrization, points of finite order and the group of rational points, and the reduction of certain diophantine problems by the theory of heights to diophantine inequalities involving logarithms. The second part deals with the proofs of selected inequalities, at least strong enough to obtain the finiteness of integral points.