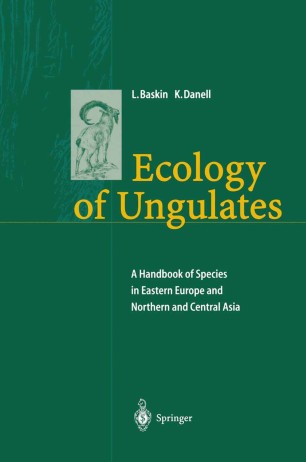 The knowledge on the ecology of ungulates (orders Perissodactyla and Artiodactyla) inhabiting eastern Europe and northern and central Asia is of special importance for those interested in zoology, ecology, nature conservation, hunting and management. There are 26 species of ungulates 2 oE-169°W within the 22. 4 million km area, between 35-82°N and 20 and they occupy several vegetation zones from arctic deserts to the subtropics. In our opinion, the advancement of science can be retarded and general conclusions will be difficult to make, if the knowledge of the organisms inhabiting one sixth of the world'sland surface, covered by this vast region, is not included. The language barrier, as well as the lack of international accessibility of local publications, makes it difficult to make use of the great volume of scientific information gathered within the territory of the former USSR. The only complete ecological review of ungulates of the Soviet Union, Mammals of the Soviet Union, vol. 1. Ungulates, was published by V. G. Heptner, A. A. Nasimovich, and A. G. Bannikov in 1961 (in Russian, Heptner and Naumov 1961)and 1989(the English translation,Heptner and Naumov 1989). This excellent book does not, however, contain scientific contributions published after 1959. This is unfortunate, because during the foHowing40years,intense and highly qualified research on the ecology and behavior of ungulates was performed.