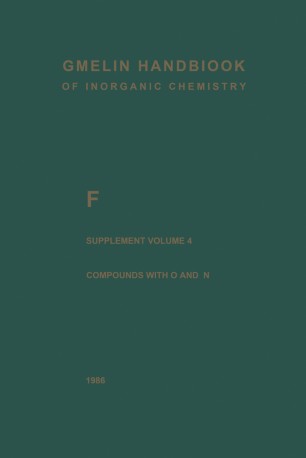 Compounds with Oxygen and Nitrogen

The present volume, "Fluorine" Suppt. Vol. 4, covers the oxygen compounds of fluorine and the binary fluorine-nitrogen compounds. In the first part "Fluorine and Oxygen", oxygen fluorides OnF m are described in the order of decreasing F: 0 ratio. It finishes with a description of hyperfluorous acid HOF. The second part "Fluorine and Nitrogen" deals with the binary fluorine-nitrogen com­ pounds. They are subdivided on the basis of the number of nitrogen atoms per molecule. Thus, species such as NFt, NF , NF , and NF are considered first followed by the dinitrogen and 3 2 trinitrogen fluorides NF, NF, and NF and related ions. 2 4 2 2 3 The other compounds under the heading "Fluorine and Nitrogen", the fluorine-nitrogen­ hydrogen and the fluorine-nitrogen-oxygen(-hydrogen) compounds, will be covered in "Fluorine" Suppt. Vol. 5. Intense development in the field of inorganic fluorine-oxygen and fluorine"nitrogen chem­ istry began in the middle of the 1950s when in less than a decade numerous previously unknown compounds and a great deal of new information were produced. Research in this field was strongly stimulated by interest in these compounds as potential high-energy oxi­ dizers for rocket fuels. That is also the reason why much of the pertinent chemical information is found in patent Iiterature and U.S. Government contractor reports.