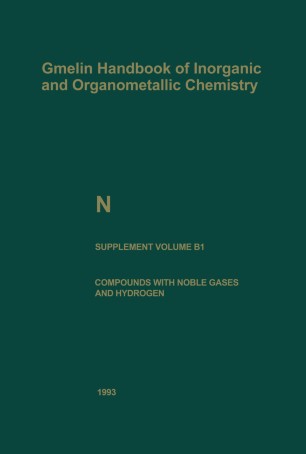 Compounds with Nobel Gases and Hydrogen

"Nitrogen" Suppt. Vol. B 1 describes the compounds of nitrogen with noble gases and, in the major part, binary compounds composed of one nitrogen atom and hydrogen. Nitrogen­ hydrogen compounds with two and more nitrogen atoms are covered in "Nitrogen" Suppt. Vol. 82. There is some information on various nitrogen-noble gas species, to a large extent because of the interest in their bonding behavior. Experimental data have been obtained chiefly for some singly charged cations, particularly those formed by argon Like ArN + and ArNi. The existence of others has only been established by mass spectrometry. The binary compounds of nitrogen and hydrogen comprise NH, NH , NH , NH , the corre­ 2 4 5 sponding ions, and some adducts. NH and NH1 are not treated. The predominant part 3 of the volume covers the description of the molecules NH and NH . 8oth species are present 2 in photolytic processes in the atmosphere. They play an essential role in combustion systems regardless of whether the nitrogen stems from the nitrogen-containing fuel or from the air. Thus, much work has been devoted to the understanding of the nitrogen chemistry in combustion and in the atmosphere. The production and detection methods as weiL as the reactions have been comprehensively described. ln addition detailed information is given on the spectral behavior, the knowledge of which is important for detecting the mole­ cules and for studying their kinetics.