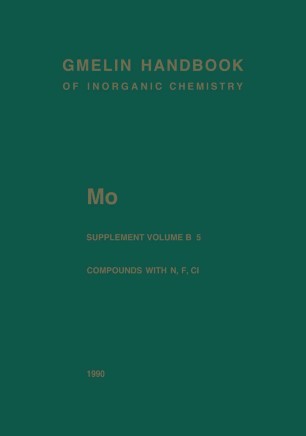 In the first part of this volume the nitrogen-containing compounds of molybdenum are described. The Mo-N system shows that M0 N and MoN are the stable nitrides. MOlybdenum 2 metal dissolves nitrogen to some extent but only at high temperatures. To get better insight into the reactions between nitrogen and molybdenum, the solubility, diffusion, adsorption and desorption phenomena, and ion bombardment are included in the section of the Mo-N system. M0 N has a large range of homogeneity toward lower nitrogen concentrations. The black 2 hexagonal MoN has only a narrow range of homogeneity. In addition some molybdenum compounds containing nitrogen and oxygen are known. The second part contains a full description of the compounds of molybdenum with fluorine. The fluorides MoF n with n ~ 2 are metastable while those with n = 3 to 6 are stable and have been observed in the Mo-F system. Pure MoF can exist without traces of oxygen, in co nt rast 3 to earlier assumptions. MoF was unambigously prepared and characterized in 1957. Its crystal 4 structure is still unknown. MoF is often contaminated with the oxide fluoride MoOF and it is s 4 difficult to remove. Even sm all amounts affect the properties of MoF . MoF , which is liquid at s 6 room temperature and solidifies to a "plastic" crystal modification below ca. 17SC, is the most investigated of all the molybdenum fluorides.