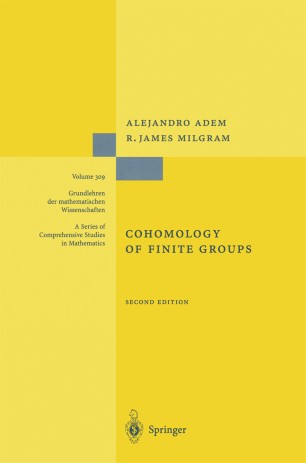 The cohomology of groups has, since its beginnings in the 1920s and 1930s, been the stage for significant interaction between algebra and topology and has led to the creation of important new fields in mathematics, like homological algebra and algebraic K-theory.

This is the first book to deal comprehensively with the cohomology of finite groups: it introduces the most important and useful algebraic and topological techniques, describing the interplay of the subject with those of homotopy theory, representation theory and group actions. The combination of theory and examples, together with the techniques for  computing the cohomology of various important classes of groups, and several of the sporadic simple groups, enables readers to acquire an in-depth understanding of group cohomology and its extensive applications.

The 2nd edition contains many more mod 2 cohomology calculations for the sporadic simple groups, obtained by the authors and with their collaborators over the past decade. -Chapter III on group cohomology and invariant theory has been revised and expanded. New references arising from recent developments in the field have been added, and the index substantially enlarged.