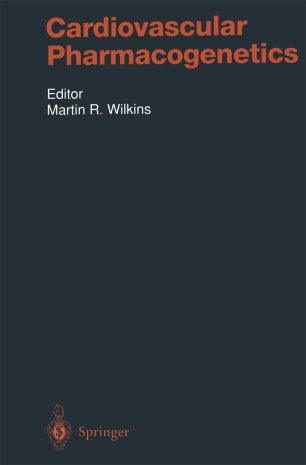 The Human Genome Project was sold to the general public largely on the basis that a complete picture of the structure of human DNA would lead to new and better medicines. These medicines would be better because they would be tailored to individual patients, maximising the chances of a therapeutic response and mi­ nimising the risks of an adverse event. Taking the idea further, pundits have pre­ dicted that the time will come when we could carry our DNA on a card which could be read rapidly and enable the physician to choose the best drug. This is the future. This is pharmacogenetics. When the draft human DNA sequence was announced and scientists were as­ ked how this would help drug development, the example most frequently given was the debrisoquine model - where poor metabolisers of this hypotensive agent are exposed to higher plasma levels from a standard dose and at risk of collapse from excessive hypotension. This observation was made over 20 years ago and predated designs to sequence the human genome. Nonetheless, it raised aware­ ness of variation in drug metabolism and was correctly assigned to genetic poly­ morphisms affecting CYP2D6. Together with the discovery of pseudocholinestera­ se deficiency, it marked the birth of pharmacogenetics. The debrisoquine example is an interesting one and worthy of further analysis.